This book highlights Canberra’s arrival as a world cultural centre, with collections of art and artefacts that are exceptional in range and intensity. It is a celebration of Australian art, and Australia’s history.

Former Australian National Gallery director Betty Churcher is a household name, thanks also to her books and TV shows. She has collaborated with young Canberra artist Lucy Quinn to select outstanding works displayed in the national capital’s museums, galleries and archives. This book is one of the few to feature art and artefacts from all of Canberra’s national collecting institutions.

Treasures of Canberra showcases famous works like Jackson Pollock’s “Blue Poles” and John Webber’s portrait of Captain Cook, alongside little known wonders such as the sketchbook of Oscar, an Aboriginal station hand in colonial north Queensland. It also includes the relics of Australia’s journey as a nation, including Phar Lap’s heart, the submarine that attacked Sydney and Azaria Chamberlain’s dress.

There are books like this already, about famous cities of Europe or Asia, but Canberra is the first Australian city to be singled out for the same treatment. Although the national capital has only existed for 100 years, it has drawn in so many treasures that the challenge for the authors was not finding material, but narrowing down a selection from the riches on offer. As much as this book celebrates fine art, it also celebrates the Australian story.

A Century of Canberra at Home

Every government has a home, and every home  has a heart. Australia’s is to be found in Canberra, one of the few purpose-built national capitals in the world.

In celebration of Canberra’s Centenary, 100 Canberra Houses tells the story of the capital through its houses, built on the Limestone Plains over the past 100 years.

Authors Tim Reeves and Alan Roberts have carefully sifted through more than 160,000 dwellings built since construction began in 1913. They have chosen 100 houses reflective of the city’s 100 years of style, each chosen for interest-value, variety, quality and significance. The book features houses within the boundaries of the ACT and those beyond the borders but still in its orbit.

Each period is reflected, from the original 1913 Robertson House to the iconic Benjamin (‘Round’) House; the first medium-density housing stock, the first ‘solar’ house and the latest EcoSolar house. It also features the first house rebuilt after the devastating 2003 bushfires. The purpose of the capital city is shown through buildings such as Government House, The Lodge, even the Aboriginal Tent Embassy.

Through the story of its houses, the book tells of its history and its people. It is bound to bring back memories for many Canberra families. It’s a bit like coming home. 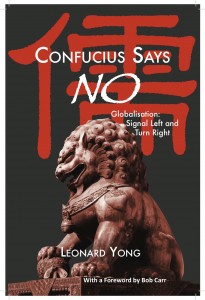 Leonard Yong’s latest book was recently launched to acclaim at the Union Club in Sydney by The Hon Michael Kirby. Among a large gathering, Mr Kirby spoke at length of strengthening ties between Australia and China, and heartily recommended Confucius Says No for those interested in nurturing this burgeoning relationship with our great neighbours. He also gave determined words on recognising the tumultuous history of the Chinese in Australia, and supported efforts to obtain an apology on behalf of those Chinese who had suffered under the White Australia policy.

“This book offers an insightful and pragmatic view of Confucianism as a driver of China’s economic success.” – The Hon Bob Carr, Australian Minister for Foreign Affairs

Leonard Yong’s latest book Confucius Says No argues persuasively that the key to understanding the Chinese, and doing business successfully in China, is to understand Confucianism and to recognise the resurgent hold of Confucian thought on the Chinese mind. Now the world’s largest manufacturer, China will inevitably become the world’s largest economy. How Australia engages with its greatest trading partner will determine the economic future for decades to come.

The author provides an expert’s insight to conducting business in Asia. He invites modern readers to turn to the immortal wisdom of Confucius—not just for vision into the future of China and the World, but to guard against delinquent governance and poor policy, in the wake of global financial crises.

Leonard Yong is one of the most respected authorities on corporate governance, and former Chief Internal Auditor at the Australian Industry Development Corporation (AIDC).

“It is essential reading if you care about Australia’s future.” – Malcolm Kerr OAM

Confucius Says No is now available in all good bookstores, and can also be ordered from Halstead Press by email at halstead@halsteadpress.com.au, or by phone on (02) 9211 3033. 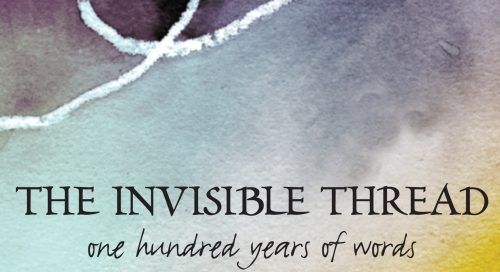 Although Melbourne’s the official city of literature, in fact Canberra punches above its weight in terms of the number of writers we’ve had here, and the literary landscape here, which is incredibly rich and diverse.

END_OF_DOCUMENT_TOKEN_TO_BE_REPLACED

Word Up: a Lexicon and Guide to Communication in the 21st Century
by Mark McCrindle with Emily Wolfinger 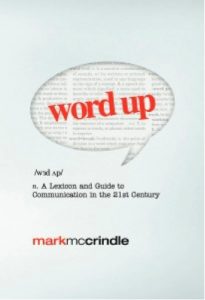 “Mark McCrindle deserves a medal. Mapless, he’s entered the alien terrains of text-speak, web slang, Gen-Z dialect, among other domains, and returned with a guidebook should we ever lose our way.” — David Astle, columnist, cross-word compiler and co-host of SBS TV’s Letters and Numbers.

Word Up is a revealing, entertaining and sometimes confronting snapshot of Australia today—across the generations.  Word Up explains how we use and mangle our language in the classroom, the media, in politics or the pub. Let social researcher Mark McCrindle help you understand what the other gens are on about. 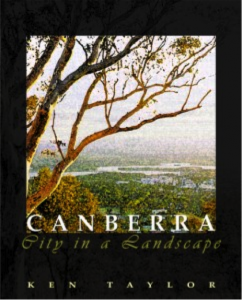 It is 100 years since Walter Burley Griffin won the 1911 international design competition to create a city in the landscape for Australia’s national city.

At a time when Burley Griffin’s vision is under siege in some quarters, highly regarded author, academic and landscape planning consultant, Professor Ken Taylor, brings his sharp eye and considerable understanding to the unique features of Canberra’s landscape design.

His book is also an account of the far-sighted people who brought the vision to life. In 1912 Walter Burley Griffin wrote of his plan for  ‘a city like no other’. Yet many Australians would be unaware that it was Prime Minister Menzies who, many years later, played a part in ensuring Australia had a fitting capital.

Canberra: City in the Landscape helps us understand this grand design and how it came about.

HALSTEAD PRESS AUTHOR Hugh Gilchrist died on 16 October 2010 after what seems to be many lives lived in one.

It was Gilchrist’s appointment as ambassador to Greece in 1968 that began a longstanding commitment to Greece and the Greek people and was the genesis of his masterwork, Australians and Greeks, published in three volumes by Halstead Press.

In a lifetime of achievements as a distinguished diplomat, scholar and writer, Gilchrist accompanied ‘Doc’ Evatt’s 1948 delegation to the UN, had postings to the Balkans, Berlin, London, Paris, Jakarta, Africa and was appointed ambassador to Spain and Greece.

He edited, along with Mungo MacCallum, the army’s wartime publication, Salt, and contributed to student newspapers and revues and the founding of the national union of students in his days at Sydney University in the company of Judith Wright, Forbes Carlisle, James McCauley, Gough Whitlam, Chips Rafferty and Donald Horne.

As with most things, he threw himself into the four-year role of ambassador to Greece; learning modern Greek, immersing himself in Greek life and culture and even naming his daughter Athene.

Later, while researching for Australians and Greeks in retirement, Gilchrist stumbled upon Greek records that showed he had been awarded the Grand Cross of St George by the Greek government.

Described as a ‘unique contributor to Australian-Greek relations and to the Greek community here’ (Canberra Times, 19 November 2010), he is loved and admired by a grateful Greek community in Australia.

The three volume Australians and Greeks has never been out of print since publication and is available from Halstead Press. 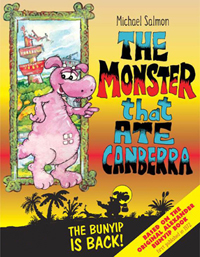 The loveable, hungry Monster That Ate Canberra is back.

END_OF_DOCUMENT_TOKEN_TO_BE_REPLACED

IN WHAT SEEMED to be a last minute aboutface, the 2010 NT Chief Minister’s History award went ahead in mid May.

Judges disqualified five of the six entries. The remaining entry—An Awkward Truth—was given the prize.  Read on for more …

Australia’s History Wars could be breaking out on a new front, with the controversial decision of an academic judging panel to hold back this year’s NT Chief Minister’s History Book Award.

Days before the advertised presentation, one of the judges has told Halstead Press publisher, Matthew Richardson, that every book entered was ruled out by the judges’ “classical interpretation of historical research”.

“What about Thucydides and Herodotus?” asks an amazed Richardson—referring to the Greek historians who founded the classical history tradition. “They insisted on basing their books on eye witness accounts, but the judges would have to rule them out because their oral research wasn’t classical. It’s an insult to the cattle men, and the Aboriginal people on the stations. It disparages everyone whose experiences won’t be counted as history just because they didn’t generate written records.”

Academic historians are beginning to line up behind some of the eliminated books. “I’ve seen Wild Cattle, Wild Country”, says Assoc. Prof. Paul Ashton: “It must have taken years to research and its sources are carefully identified. It is hard to see how the history of the Northern Territory can ever be written without that level of oral research. Insisting on textually oriented research is a remarkable misunderstanding anywhere—and especially where so much of the past is stored in people’s memories.”

The Award was to have been announced on 13 May—the eve of the NT Writers’ Festival. What happens instead may hinge on the outcome of protests raised with the Chief Minister’s office by some of the publishers. “Narrowly managed awards have a way of haunting prizes,” says Matthew Richardson, “people still talk about the ‘lost’ Booker Prize, and Dobell’s claim to the 1943 Archibald. This is an issue that matters well beyond 2010 and the borders of the Territory.”

PROF. PAUL ASHTON is head of the UTS Public History Centre. His new book, History at the Crossroads, is due for release in July. MATTHEW RICHARDSON has 24 years’ experience editing history. His next book, The West and the Map of the World will be published by MUP in August.

BOTH ARE AVAILABLE FOR INTERVIEW—CONTACT HALSTEAD PRESS 02-92113033

“Far from permitting myself to derive the narrative from the first source that came to hand, I did not even trust my own impressions, but it rests partly on what I saw, partly on what others saw, the accuracy of the reports being always tried by severe and detailed tests . . . My conclusions have cost me some labour from want of coincidence between accounts from different eye witnesses.”

His work is based almost entirely on oral sources, as are the Histories of Herodotus. These two historians are the classical wellspring of all Western history, but the NT judges would have to rule them out because their oral history research wasn’t classical.

It has cost Anne Ingham some labour to get eye witness accounts of everything she writes about. Hers is original historical research of the classical and most valid kind. The individuals in her history are not literary folk, or bureaucrats or academics, who leave written traces of each achievement. Their accounts can only be unlocked by oral history research. That doesn’t mean they don’t count in the history of the Territory.

Jason Steger in The Age writes…